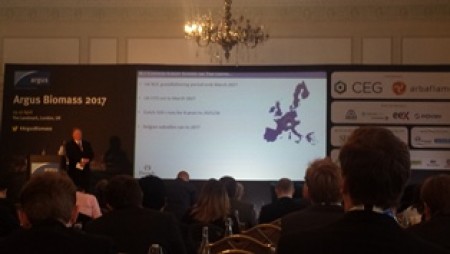 Asian countries are showing a strong interest in consuming more wood pellets in order to replace coal in their power grids and to shift away from nuclear power, according to an industry expert speaking at the Argus Biomass 2017 conference.

Giving a presentation entitled ‘A statistical review of the consumption of biomass for heat and power generation’, Rachael Levinson, editor of biomass at Argus, said: “Asia has the potential to overtake Europe in the next few years.”

This fact has led Canadian and US wood pellet producers to show an interest in exporting their wood pellets to Asian countries like Japan.

Currently, the UK is the world’s biggest net importer of wood pellets.  It used around 7.2 million tonnes last year.

This is mainly driven by Drax’s coal-to-biomass plant conversion.

Japan’s imports are driven by its feed in tariff (FIT) scheme, Levinson maintained. Last year, it imported 400,000 tonnes of wood pellets. The country is also turning to bioenergy in a move to turn away from nuclear power after it experienced the Fukushima nuclear disaster in 2014.

Elsewhere, in a Pöyry Management Consulting 2017 global pellet market report, the consultancy said: “In Asia Pacific, South Korea has shown a remarkably quick uptake of demand reaching 1.7 million tonnes in 2016 and has become the main consumer of wood pellets in the region.

“Demand from South Korea is expected to reach similar demand levels in 2017 and will continue to grow as generators work towards meeting their renewable targets.

“Japan is yet to show any significant demand volumes, but could also begin importing considerable volumes once all of the bioenergy projects that are approved under the feed-in-tariff support scheme are operational.”