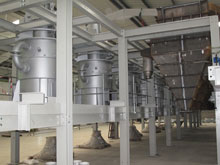 A new plant in Plymouth, UK is to open, converting 40,000 tonnes of wood waste into renewable heat and electricity annually, which should reduce CO₂ emissions by around 16,500 tonnes a year.

Three companies, MITIE's Asset Management, O-Gen UK and the Una Group are working together on the development, under the name of O-Gen Plymtrek.

During construction, about 50 jobs are expected to be created and when the facility comes online, there should be 23 people working at the plant.

The development is scheduled to open in the middle of next year and will produce about 26,000MWh of electricity each year, powering about 6,200 homes.

The wood, which would normally go into landfill, will be used to produce the gas fuel which can be combusted within a boiler to generate steam

This steam will then be used to power a turbine which will produce power and heat.

MITIE’s Asset Management will maintain and operate the plant during a 10 year contract.

Mike Tivey, MD of MITIE’s Asset Management, says: ‘Generating energy from waste material is an important part of the fast-growing decentralised energy market, which provides organisations and communities with secure, locally generated power and heat for the future.’

David Pike, MD O-Gen UK, adds: ‘This plant represents the first of a series of combined heat and power plants currently under discussion with MITIE across the South West region.’