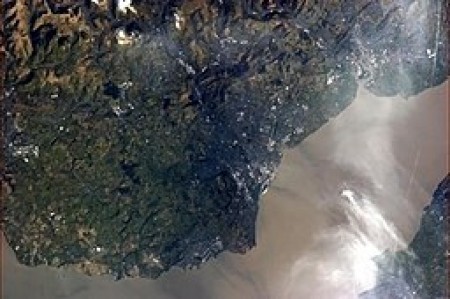 Cardiff from the International Space Station

Plans for a woodchip biomass power plant have been accepted in Cardiff, various media are reporting.

According to both the BBC and Wales Online, outline plans for the biomass power station have been approved by councillors.

Wales Online reports that if completed, the facility would burn up to 75,000 tonnes of woodchips a year. The facility would include a 167ft-high chimney, power station buildings around 104ft high and up to 130,000 square feet of industrial space. The proposed site is Rover Way, close to Cardiff’s shoreline.

Before the meeting agreeing the outline plans, Gypsy and Travellers Wales, a charity aiming to ‘support Gypsies and Travellers to improve access to suitable accommodation, public services and employment skills,’ wrote to the council on behalf of residents of a local caravan site. This letter voiced concerns over the health effects of pollution from the site.

Cardiff councillor Sean Driscoll also expressed concerns about the development, telling Wales Online: "The other (concern) I have is air quality and the impact it's going to have on the travellers site next door.

"It's going to have quite an impact on the south of the city in terms of air quality. Air quality is going to be a big concern."

A full application for the plant needs to be submitted and approved before any work can begin on the site.

Cardiff from the International Space Station