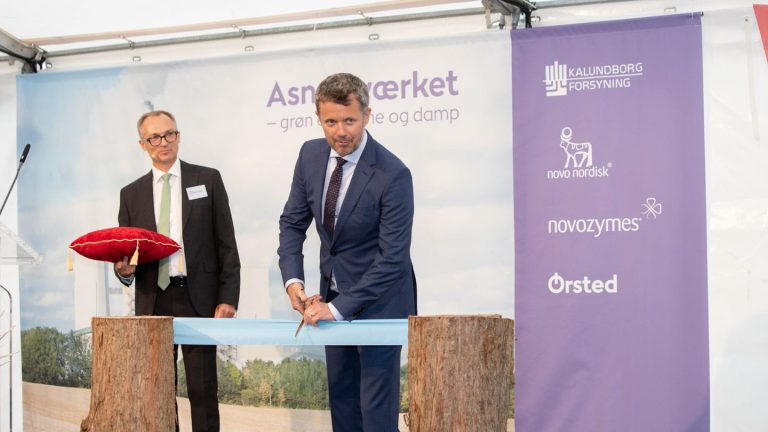 Following more than three years of work on the conversion, Asnæs Power Station was finally inaugurated on 21 August. The power station can now supply heat and power without using fossil fuels. The wood chips used at the facility will primarily come from by-products such as branches, twigs, and thinning wood.

Morten Buchgreitz, executive vice-president and CEO of Markets and Bioenergy at Ørsted, said: “The Crown Prince’s visit marks the completion of an extensive conversion process.

“Asnæs Power Station has been given a new and greener life, which will benefit Kalundborg residents and businesses and contribute to Denmark’s green transformation.”

The conversion from coal to wood chips at Asnæs Power Station will result in an annual reduction in carbon emissions of around 800,000 tonnes, equivalent to the emissions of more than 400,000 cars.

“I’m very pleased that we’ve now commissioned Asnæs Power Station’s new wood chip-fired unit,” added Buchgreitz. “The future belongs to sustainable energy sources such as wind, solar and biomass. Therefore, we’ll be phasing out coal at all our power stations by 2023, and the decision about Asnæs Power Station, which was made together with our customers, is an important step on the way.”

“The collaboration in the Kalundborg Symbiosis plays a major role. In future, it’s absolutely crucial that the district heating in Kalundborg is based on sustainable energy and that we can continuously provide a stable heat supply at a competitive price.”

Henrik Wulff, executive vice-president of product supply, quality, and IT at Novo Nordisk, said the inauguration marked an “important milestone” for the firm, as it now only has sustainable energy sources at its production facility in Kalundborg.

“Novo Nordisk has set a target of zero-carbon emissions from our global operations and transportation by 2030 at the latest,” said Wulff. “This target is part of an ambitious environmental strategy ‘Circular for Zero’, which is to make Novo Nordisk a company with zero environmental impact.

“Among other things, the strategy entails that Novo Nordisk will continue to reduce its environmental footprint from its production.

“The conversion of Asnæs Power Station where coal is substituted with sustainable biomass will contribute to this goal.”