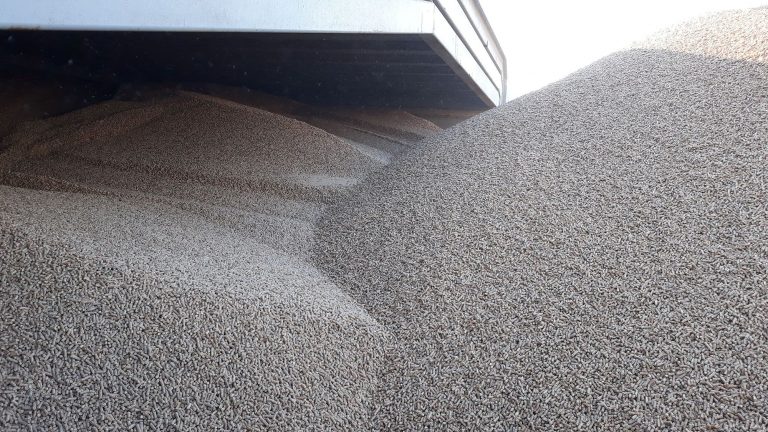 The facility, which is pegged to open by the end of 2022, plans to employ 24 people and produce 60,000 tonnes of pellets per year, said the bioenergy company’s president and CEO Mark Cooper.

Mr Cooper said: “It’s great. It feels like the last two years of the investment we’ve made as a company is 100 percent worth it and we’re on the right track.

“We always figured that we were on track, but when you see the dream start to come true, it’s pretty exciting.”

The company began as a start-up in 2020, initially piloting the straw-to-pellets process before going forward with the production facility.

Mr Cooper said the pellets will be shipped to Japan and Europe to be burned as a source of biomass energy.

The product is considered carbon neutral because it comes from plants. Before they are burned as energy, the plants remove carbon from the atmosphere through photosynthesis.

During the announcement at Canada’s Farm Show, in REAL district, Cooper signed his first multi-year purchase agreement with nearby farmer Thomas MacKenzie, who grows various crops and runs a dairy farm north of Regina.

MacKenzie will supply flax straw to the facility. For him, it will be an avenue to get rid of excess amounts of it.

Mr MacKenzie said: “It’s kind of not the best product to deal with, and we’ve never liked burning it. If you’ve ever been out in the country when they’re burning it, it’s quite something to see, so it’s a very sustainable avenue to get rid of it.”

Mr Cooper said Saskatchewan grows 70 percent of Canada’s flax crop, which made Regina an ideal spot for the processing facility. Operations will be located near McDonald Street and First Avenue East in the city’s northeast.

He hopes to sign additional contracts with other farmers at the farm show before the company begins operating.

Mr Cooper said: “We’ve really tried to structure a deal that appeals to the farmers. It doesn’t lock them in and gives them the opportunity on an annual basis to choose whether they want to sell straw to us or not.”

Mr Cooper hopes production at the processing facility can double to 120,000 tonnes by mid-2023.

The company also plans to have multiple facilities across Saskatchewan and other Prairie provinces by 2026.

He explained demand for biomass has grown in Asia and Europe, where it has become an increasingly common source of energy.

In May, Mr Cooper explained companies in Europe are eagerly looking for the product because they can no longer source it from Russia. The war in Ukraine has caused countries to look elsewhere.

The company has added wood pellets to its product line-up to help meet this demand. It’s looking to secure a wood pellet mill in northern Saskatchewan, likely in the Prince Albert region.

With more biomass facilities opening overseas, Mr Cooper said Saskatchewan could also use this as a source of energy as the province transitions away from coal.

He said biomass can be a form of base-load power, explaining: “It’s more expensive than coal, but when coal disappears, what choices do you have? And what’s the best choice for Saskatchewan? My opinion is biomass.”