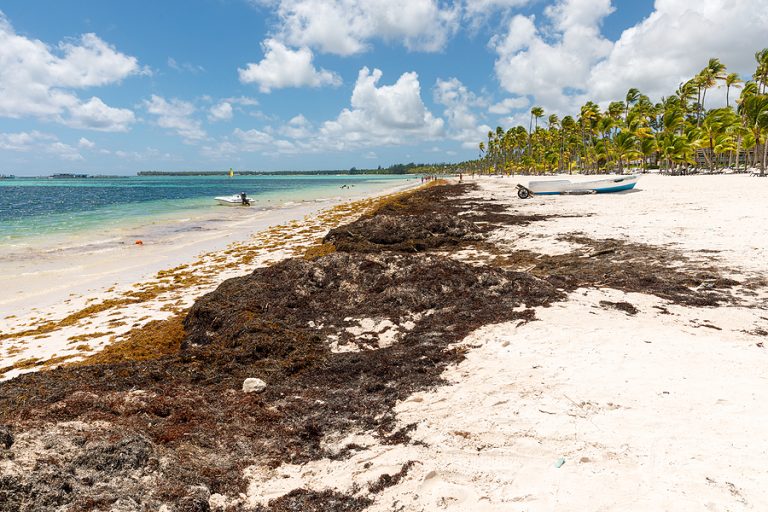 A Michoacán company that is already using the nopal, or prickly pear cactus, to produce biogas is now planning to do the same with sargassum, a genus of seaweed that washes up on Caribbean coast beaches in large quantities, reported Mexico News Daily.
Nopalimex, a Zitácuaro-based firm that in 2019 opened Mexico’s first nopal biogas plant, has already proved that sargassum can be converted into biogas and is now seeking a patent for its process. It is also preparing to open a plant in Quintana Roo, the state most affected by the seaweed during the annual sargassum season.
In an interview with the Milenio newspaper, Nopalimex’s technical director said that trials in 2019 demonstrated that raw biogas with a methane content of up to 72% can be produced from sargassum.
“We found that the [methane] content … is very acceptable, … which makes [sargassum biogas] ideal for energy generation,” said Miguel Aké Madera, an electrical engineer.
He said that biogas obtained from both sargassum and nopal has a methane content in the 64-72% range, whereas that obtained from avocado waste is in the 64-79% range. Another Michoacán-based company partly owned by Nopalimex’s owner produces biogas from avocado seeds and skins.
Aké explained that biogas is obtained from sargassum via anaerobic digestion. After the seaweed is cleaned of sand and salt it is fed into a hermetically sealed biodigester, where the biogas is produced via a process in which microorganisms break down the sargassum in the absence of oxygen. The gas is produced in a period of three to four weeks, Aké explained.
With its 64-72% methane content, the raw biogas “can be used directly in boilers, in hotel boilers for example,” he said.
To generate electricity from the gas, “you have to clean it in such a way that the methane content is at least 75% so that it doesn’t damage the motor of the electrical generator,” Aké added.
In the Quintana Roo municipality of Felipe Carillo Puerto, Nopalimex intends to install a biodigester into which 150 tonnes of sargassum per day will be fed, Aké continued. “It will yield 15,000 cubic meters [of biogas] per day."
Aké pointed out that Nopalimex already has a site where it intends to install its sargassum processing plant but will wait to hold talks with the new Quintana Roo government – which takes office later this month – before moving ahead with the project.