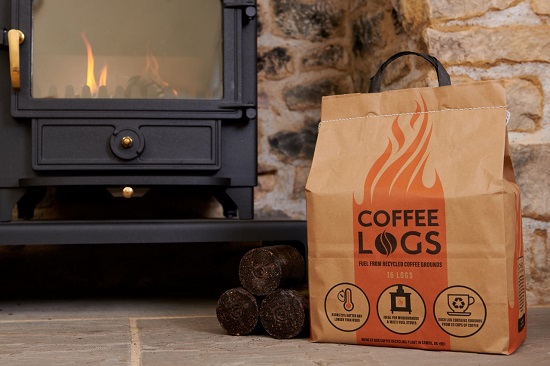 Passengers at Stansted Airport create over 150 tonnes of coffee waste annually. The new partnership, which will commence on 21 October 2019, will see every coffee shop and restaurant in the airport segregating spent coffee grounds before being transported to bio-bean’s processing facility, located near Huntingdon in Cambridgeshire, UK.

The coffee grounds are then converted into Coffee Logs, which can be used in domestic wood burners and multi-fuel stoves as a sustainable alternative to conventional fuels. This method of recycling coffee grounds reduces carbon dioxide equivalent (CO2e) emissions by 80%, compared to being sent to landfill, and by 70% if they were sent to an anaerobic digestion facility and mixed with other food waste.

“Getting your coffee fix at the airport is a staple of many people’s journeys, but with six million cups being sold at Stansted every year, it’s great to find a new, sustainable way of using the 150 tonnes of waste that produces,” commented Steve Griffiths, COO at London Stansted.

“We are always looking at new and innovative ways to reduce waste and our impact on the environment and are extremely proud of our track record and commitment to sending zero waste to landfill. While achieving this can sometimes be easier said than done, this exciting new partnership is the perfect example of what is possible if we think a bit differently, and we are proud to be the first UK airport to convert its coffee waste to fuel.

“This perfectly complements our existing initiatives such as donating to local food banks, giving out free reusable bottles and cups and recently increasing the number of water refill stations throughout the terminal.”

George May, director and CCO at bio-bean, added: “We’re thrilled to have our local international airport choose to recycle its spent coffee grounds with bio-bean. Transforming 150 tonnes of coffee waste every year into Coffee Logs will save over 85 tonnes of CO2e emissions. Stansted’s commitment to recycling its coffee waste is a step in the right direction for the aviation industry, and one we hope will serve as a catalyst for others to follow suit.”