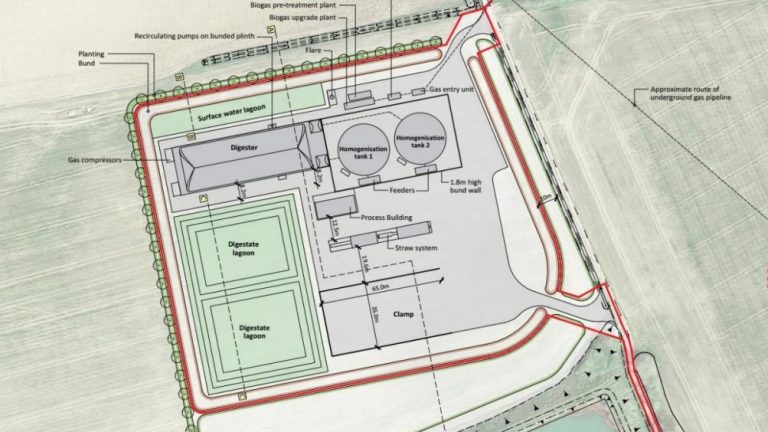 A new anaerobic digestion plant between Lincoln and Scunthorpe, which sparked concerns around smells from the facility, has been approved, reported The Lincolnite.
The proposals for an on-farm facility on land off Barff Lane, in Glentham, were given the go ahead by Lincolnshire County Council’s Planning and Regulation Committee on Monday.
They were originally approved by West Lindsey District Council in 2020.
However, rule changes regarding energy funding mean that the facility can not be subsidised unless it uses at least 50% waste or residue feedstock in the plant, instead of 100% pure agricultural feedstock.
The development, which remains mostly similar to the previous one before WLDC, would use biogas to output 6.8MW of energy and would use around 42,250 tonnes of material a year – with most of it produced on the farm.
Chris Barton, the applicant and farmer of the land, told councillors: “Our new proposal will see less productive agricultural land used for energy crop production while still producing biomethane for injection into the National Gas grid immediately adjacent to the site.”
He said there was no need for extra traffic through nearby villages, as much of what would be used was already produced by his own business, or nearby pig or chicken farms which already moved around the local area on a daily basis.
He said this also meant there was no requirement to stockpile on the site.
Although Glentham Parish Council had not objected to the plans, the adjoining Bishop Norton with Atterby Parish Council raised concerns around odour.
Other concerns had also been raised around the traffic being used to transport material to the site.
Councillor Tom Ashton said the committee were all familiar with anaerobic digesters, adding: “The technology has been around for quite some time. I’m perfectly comfortable with it.
“There is permission for one of these already on the site, all we are determining is what it can be fed with.
“Clearly it’s much better to use a recycled product rather than having to grow new.”
Other councillors also noted that the geography of the site supported the new ingredients and that control measures were in place.