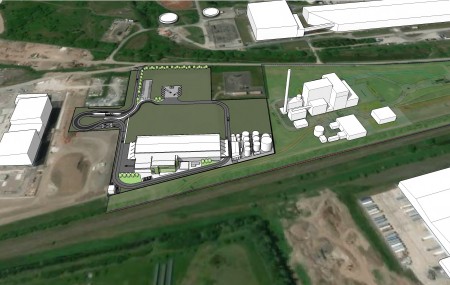 An artist's impression of the facility.

Flintshire County Council has approved plans for a new biogas from waste plant in Wales, which will supposedly produce up to 2 megawatts of energy from 182,000 tonnes of municipal waste.

“The plant will bring more than £50m of investment to the North Wales area, creating substantial employment throughout the construction period and its subsequent ongoing operation,” said Dave Green, technical director at Logik.

“It will also deliver arguably the most advanced and environmentally friendly landfill diversion to date through a process that diverts more than 85% of our black bin waste into recyclables and recoverables and thus supporting Wales in its zero to waste targets.”

According to Green, the ArrowBio technical process which will be used in the facility allow an extra 6,000 tonnes per year of recyclables to be processed with would otherwise be missed.

“These are recyclables that are put into black bin bags by mistake and they are hard to obtain normally.”

Neil Culkin, a regional director at Pegasus Group, said: “This proposal represents the first UK site utilising this concept, and we are pleased to be involved in such an innovative scheme.”

According to a statement from Pegasus Group, the ArrowBio process uses a hydrochemical separation and preparation process to recover recyclables.

Water and mechanical equipment separates the organic fraction, produce high methane content biogas and recycle up to 70-80% of the waste. By-products such as various plastics, cardboard, wood and metals are suitable for recycling, and some of them also for RDF (Refuse-Derived Fuel) treatment. At the end of the anaerobic process, the organic remains are used as soil improver for agriculture as well as for bio-drying systems.

"We are proud to have this advanced process showcased here in North Wales and for the first time ever outside of Israel, attracting a global audience,” Green continued.

An artist's impression of the facility.