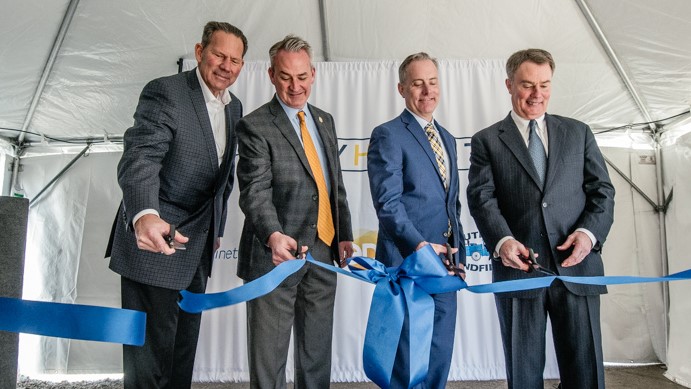 The plant, which is now fully operational, will convert the methane into around 8 million gallons of pipeline-quality RNG annually, reducing greenhouse gas (GHG) emissions in Central Indiana, developing a local renewable resource and lowering fuel costs. Indy High BTU is the largest RNG plant in Indiana.

The facility will begin supplying Kinetrex Energy with RNG, which it will turn into liquefied natural gas (LNG) and sell to Midwest transportation fleets. Kinetrex recently announced a six-year agreement with delivery service UPS to supply it with up to 52.5 million gallons of LNG for its Class 8, LNG-powered fleets in Chicago, Toledo, Columbus, St. Louis and Indianapolis. LNG engines are said to have 90% lower emissions than the cleanest diesel.

"We are proud to partner with Kinetrex Energy and EDL to make this project possible," said South Side Landfill president Mike Balkema. "South Side Landfill has been proactively capturing gas at the landfill for commercial use for more than 30 years, and this is the latest step in reducing emissions to make our city safer and healthier for our residents."

EDL's head of North American operations, central region, Jim Grant, added: "Indy High BTU will reduce methane emissions by approximately 17,000 tons per year, and carbon dioxide emissions by approximately 41,000 tons per year - which is equivalent to emissions from almost 47 million gallons of gasoline consumption. We are excited to harness the full potential of RNG to help decarbonise the transportation industry."

"Indy High BTU is a major milestone for Kinetrex Energy, our partners, and central Indiana," commented Kinetrex Energy president and CEO, Aaron Johnson. "The plant strengthens our position as leaders in the creation of renewable fuel and natural gas delivery.

"The RNG from the landfill replace over 8 million gallons of diesel. RNG is cheaper than diesel and significantly reduces the emission of methane and other GHGs."