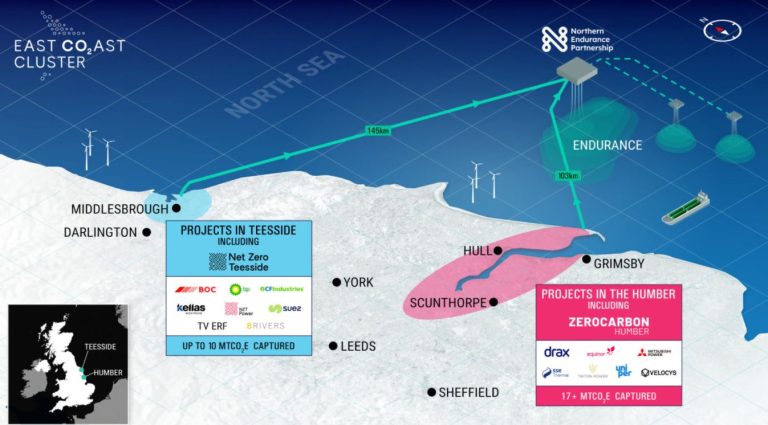 The East Coast Cluster (ECC) has been named as one of the UK’s first carbon capture, storage and utilisation clusters following a successful bid to the UK Government.

The ECC is made up of both Zero Carbon Humber and Net Zero Teesside, supported by the Northern Endurance Partnership (NEP) - a collaboration between bp, Eni, Equinor, National Grid, Shell and Total. The successful bid represents a significant boost for the industrial heartlands of Teesside and the Humber.

“Today is a significant milestone on our country’s journey to net zero emissions by 2050,” said Andy Lane, managing director of the NEP.

“We are delighted that the East Coast Cluster has been selected and we will look forward to delivering our project removing up to 50% of the UK’s industrial cluster CO2 emissions, creating tens of thousands of jobs and establishing the UK as a leader in the energy transition.”

Drax will act as an anchor project for Zero Carbon Humber, protecting and creating tens of thousands of jobs, kick-starting a new green industry for the region.

Will Gardiner, CEO of Drax Group, said: “Today’s government announcement is welcome news, and a crucial next step on the UK’s decarbonisation journey.

“Drax’s bioenergy with carbon capture and storage (BECCS) project will play a vital role in the East Coast Cluster, enabling the UK’s most carbon-intensive regions to decarbonise, helping the UK to reach net zero.

“BECCS at Drax will protect and create tens of thousands of jobs while showcasing the UK’s global leadership in a vital negative emissions technology.

“The first BECCS unit at Drax could be operational in 2027, delivering the world’s largest carbon capture project, permanently removing millions of tonnes of CO2 from the atmosphere, playing a vital role in the fight against the climate crisis.”