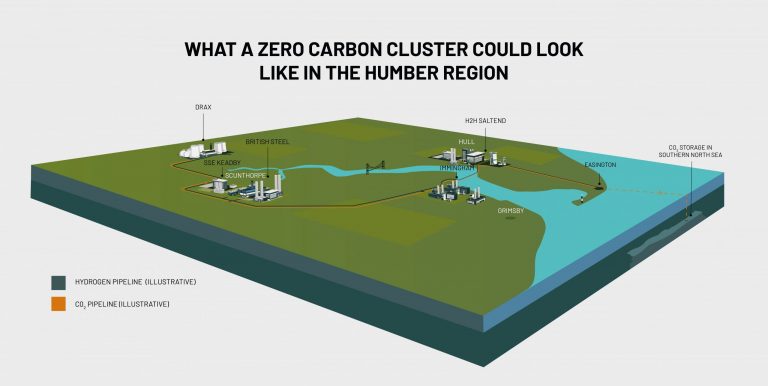 ‘Cutting-edge’ green energy technologies in the UK’s Humber region could create tens of thousands of jobs, boost skills, and transform the area’s fortunes in the face of economic uncertainty caused by the COVID-19 pandemic, according to a new report.

The report from Vivid Economics was commissioned by Drax Group, a founding member of the Zero Carbon Humber partnership, to evaluate the socio-economic potential large-scale deployment of green energy technologies would have on the region and the UK overall.

The analysis shows scaling up bioenergy with carbon capture and storage (BECCS), which Drax has already successfully proven at its power station in North Yorkshire, would support almost 17,000 jobs during construction in 2028.

“The boost to economy created by developing these new green energy technologies in the Yorkshire and Humber region would be huge – and we can do it quickly,” said Will Gardiner, CEO of Drax Group.

“The technologies are ready to go, so tens of thousands of jobs could be created as early as 2024. This would deliver a real shot in the arm to communities struggling as a result of the COVID-19 crisis.

“The positive impacts of these new green energy schemes aren’t limited to the Humber region, either. This could kick-start a whole new industry in the UK, enabling us to show the world what can be achieved for the environment and the economy when governments, businesses, and communities work together.”

Using carbon capture technology across Drax’s four biomass units would accelerate the UK’s efforts to reach net-zero by permanently removing 16 million tonnes of CO2 from the atmosphere every year – a significant proportion of the negative emissions the UK needs to meet its net-zero targets.

With the right government policies in place, BECCS could be operational at Drax as soon as 2027, boosting the Humber’s efforts to become the UK’s first zero-carbon industrial cluster. Other industries across the region would tap into the same CO2 transportation and storage infrastructure, enabling further decarbonisation.

In October, Drax was one of 12 major businesses and organisations as part of the Zero Carbon Humber Partnership to jointly submit a public-private sector funded bid worth approximately £75 million (€83.7 million) to the UK Government to establish a CCS and hydrogen economy in the region.

Deploying hydrogen production at scale for fuel-switching, as well as carbon capture to decarbonise gas power and other industries, alongside BECCS at Drax, could create and support as many as 49,000 jobs in the region at its peak in 2027.

British Chamber of Commerce director general Adam Marshall said: “Coronavirus has had a significant impact on our business communities. To help them restart, rebuild, and renew, the government will need to set a clear framework and invest in greener, more sustainable technologies to not only meet our carbon goals, but help boost local growth and create the jobs of the future.”