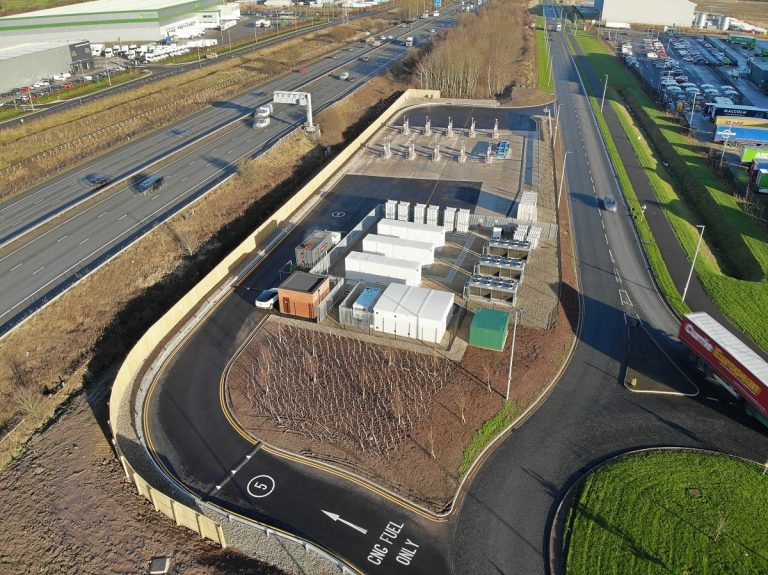 CNG Fuels, the UK’s largest supplier of alternative low-carbon fuels for HGVs, has announced plans to host hydrogen fuel trials across its network.

The trials will take place in CNG Fuels’ public access biomethane refuelling stations to support the future decarbonisation of HGVs.

A new branch of the company, HyFuels, has been established to identify the best hydrogen production pathways and infrastructure solutions for HGVs so it can support customers in adopting hydrogen ‘quickly and easily’ when it becomes commercially viable.

Where will the hydrogen come from?

CNG Fuels is evaluating both on-site production via small-scale SMR electrolysis, as well as the comparison of hydrogen delivered to site from larger-scale SMR and electrolysis sources, with several planned near sites in its immediate station pipeline.

The hydrogen will either be ‘blue’ from the SMR of biomethane from waste feedstocks, enabled by the firm’s existing competency in sourcing renewable biomethane for bio-CNG production or via electrolysis from renewable electricity for ‘green’ hydrogen. Once grid-connected hydrogen is available in the future, either as a blend with methane or in pure form, the hydrogen will likely be derived from a blend of renewable sources, according to the grid specification.

“HGVs alone account for 5% of all UK emissions, making their decarbonisation one of the single most important things the UK can do to meet our net-zero ambitions,” said Philip Fjeld, CEO of CNG Fuels.

“Renewable biomethane is and will continue to be the most effective decarbonisation solution for heavy transport for many years. However, we have launched HyFuels to ensure we are ready to support our customers’ journey to a multi-fuel future as new technologies become commercially viable and the fuel readily available.”

CNG Fuels already supports major fleets with 100% renewable biomethane sourced from food waste and manure across its UK network. Demand for the fuel has been doubling every year for the past five years. The company expects that with the rapid expansion of its UK network, this will continue to accelerate with around 10% of the nation’s high mileage HGV fleet running on bio-CNG by 2025.

In the future, however, other low carbon technologies will become more prevalent as technology develops and costs fall. The Climate Change Committee expects hydrogen-powered HGVs to play a major role in decarbonising freight transport from 2030 onwards and the UK Government’s recently-released Net Zero Strategy includes a policy to expand trials for zero-emissions HGV technologies.

Baden Gowrie-Smith, chief financial officer of CNG Fuels and head of hydrogen development for HyFuels, commented: “We build our sites with our customers’ future needs in mind, acquiring additional space so we can expand as demand grows.

“This means up to 30% of our future land will be perfectly placed to deploy multi-fuel trials on some of the busiest haulage routes in the UK. As soon as these technologies are viable, we will be ready to support our customers in adopting the latest and greatest in low-carbon technology.”