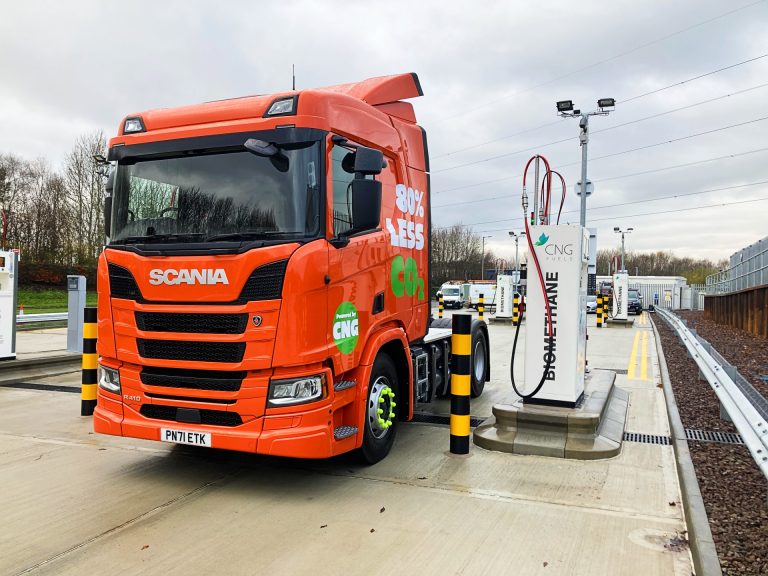 The new station, located adjacent to the busiest transport route in Scotland between Edinburgh and Glasgow, will help major brands such as Hermes, Warburtons and Waitrose to decarbonise haulage emissions and save money.

Inverness and Aberdeen are now within the range of CNG Fuels’ low carbon refuelling network for the first time. The site can refuel up to 450 lorries per day with renewable, sustainable biomethane sourced from food waste. The fuel will cut carbon emissions by 90% and reduce lifetime vehicle cost by 30-40% compared to diesel.

“Glasgow and Scotland were at the centre of the world debate on climate change during COP26, injecting urgency into the global push to tackle the climate crisis,” said Philip Fjeld, CEO of CNG Fuels.

“Our new station, just outside Glasgow, is an example of real-world action on climate, unlocking low-carbon deliveries across the busiest transport routes in Scotland and supporting the country to meet its emissions reduction targets.

“Renewable biomethane is the cleanest, most cost-effective solution for HGVs available today. Our growing network of refuelling stations gives fleets across the country the confidence to significantly cut emissions from transport, today.”

Demand for renewable biomethane has increased by 1,000% in the last five years as brands urgently seek to reduce emissions in line with the UK’s net-zero goals. CNG Fuels said the trend is set to continue, with demand forecasted to increase five-fold in the next five years as the UK Government’s 2040 ban on the sale of new diesel HGVs approaches.

The Bellshill station is the latest in CNG Fuels’ UK-wide network of refuelling stations, which already puts most of the UK within a 300-mile round-trip of a refuelling site. Seven stations are already operational and there are plans to open up to 14 more by 2023.

The new station is also located within proximity of two HGV dealerships, Scania and IVECO, which are among the leading manufacturers of biomethane-ready HGVs.