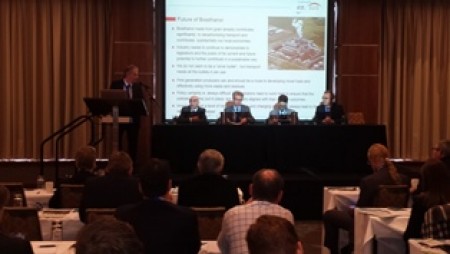 The future of bioethanol, advanced biofuel developments and an uncertain policy landscape were some of the hot topics discussed at this year’s Biofuels International and Bioenergy Insight conference.

The conference took place in Edinburgh, Scotland, from 4-5th October.

Rob Wakely, head of low carbon fuels division, energy technology and international directorate, at the UK’s Department for Transport (DfT), kicked off proceedings on day one.

Wakely discussed the UK’s Renewable Fuel Transport Obligation (RFTO), which is a legal requirement on fuel suppliers to supply a set percentage of sustainable renewable fuel. It is currently set at just under 5%.

It is classified as a tax and spend measure by Her Majesty’s Treasury, and is worth around £450m (€504m) per annum. According to Wakely, the RFTO is responsible for emissions savings equivalent to taking more than one million vehicles off the road each year.

He went into detail about the government’s plans to introduce a cap on crop-based biofuels in order to meet the UK’s renewable fuel obligations. The maximum level for the use of fuels made from agricultural crops will begin at 4% in 2018 and reduce linearly year on year from 2021 to reach 3% in 2026 and 2% in 2032.

He said advanced low-carbon fuels can tackle plane and truck emissions. Produced from wastes, they offer more than 95% carbon savings, but the fuels “we need most are still largely pre-commercial”, Wakely maintained.

Although he emphasised that electrification was the government’s preferred means of decarbonising road passenger transport, he said that demand forecasts indicate that even if all new cars were electric from 2020, only around 10% of UK transport energy demand would come from electricity in 2030.

Elsewhere, Shell’s general manager for advanced biofuels, Andrew Murfin, emphasised how Shell was one of the world’s largest blenders and distributors of biofuels.

Shell produces one of the lowest-CO2 biofuels available today through its joint venture Raízen, which makes ethanol from sugarcane in Brazil.

He described how Raízen produced around 2.2bn litres of low-ethanol per year.

He said that policy certainty is always difficult but legislators need to work hard to ensure that the policies that they put in place are as closely aligned with their desired outcomes.

Speaking about the future of bioethanol, Pearson said that bioethanol made from grain already contributes significantly to decarbonising transport. He also said that the industry needs to continue to demonstrate to legislators and the public of its current and future potential to further contribute in a sustainable way.

He also said that first-generation producers can and should be a route to developing novel fuels.

Separately, Chris Stark, director of energy and climate change for the Scottish government, discussed Scotland’s final climate plan and the promise of using bioenergy with carbon capture and storage.

Strauss also touched on sustainability issues. He said the “foundation of carbon emissions mitigation from the use of wood pellets happens because the net carbon added to the atmosphere from the combustion of wood pellets is zero”.

As long as the growth rate equals or exceeds the harvest rate, the net stock of carbon held in the forest landscape is held constant or is increasing, Strauss added.

Enviva’s Daniel Davidson also went into sustainability issues and said that the company’s ‘Track & Trace’ system follows every tonne of primary wood back to its origin in the forest or sawmill.

The topic of sustainability was also addressed by Chris Holmes, head of waste and bioenergy at the Green Investment Group. He said that woody biomass continues to be challenged by lobby groups and think tanks and that the main consistent accusation levelled against biomass is that pellet demand causes felling of trees.

Concerns with woody biomass were recently set out in two papers published by Chatham House – the REA provided a rebuttal to various points, he mentioned. Publication by the UK government of Ricardo's study on counterfactuals has allayed many fears of high carbon-emitting outcomes, Holmes explained. However, he said that the conclusions and implications of the report continue to be debated.

Holmes said that the biomass industry should aim to be fully transparent about the sourcing of its feedstocks.

This story was written by Liz Gyekye, editor of Biofuels International and Bioenergy Insight.