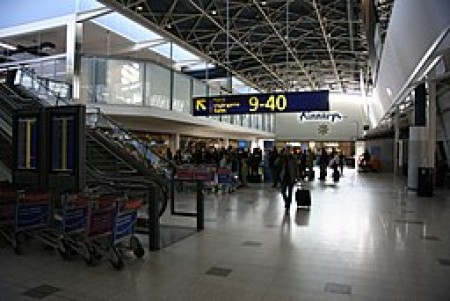 Interior of the terminal 1 of Helsinki-Vantaa Airport, image courtesy of Jaakko via Wikimedia Commons

“The ACA certificate awarded to Helsinki Airport is an important milestone in the implementation of Finavia’s accelerated climate programme at our airports.  Our climate programme comprises a number of different measures, but Helsinki Airport plays a key role in the reduction of emissions”, explained Mikko Viinikainen, sustainable development director at Finavia, the company which operates Helsinki airport.

A range of renewable energy sources are being used to keep the airport’s carbon emissions low, including biodiesel and bioenergy.

Pellet fuels, alongside geothermal energy, are being used as heat sources for the airport. Airport vehicles, meanwhile, are being fuelled with renewable diesel. The buses travelling between the terminal and aircraft are fuelled by biodiesel produced entirely from waste and residue.

Solar and wind power, as well as an increase in LED lighting, are also contributing towards keeping the airport’s carbon emissions low.

Launched in 2009, the AQA certificate for carbon neutrality is globally recognised. Its aim is to support airports in their environmental efficiency drive in a bid to achieve the emissions targets set for the aviation industry. In order to keep the accreditation, Helsinki airport must supply evidence every year that it is continuing to reduce its carbon emissions.

“It is increasingly important that companies set an example in reducing emissions. Finavia is committed to working hard to ensure that our airports will not increase their carbon dioxide emissions in 2020. In addition to minimising our own emissions, this also means that we are committed to reducing emissions in countries struggling with environmental problems, such as in India, through offset mechanisms”, said Viinikainen.

Finavia, which operates a network of 21 airports in Finland, is a key partner in the joint commitment of European airport companies striving to ensure 100 airports in Europe are carbon neutral by 2030. The global aviation industry aims to halve the emissions generated by international air traffic by 2050, despite the continued growth in the sector.

Interior of the terminal 1 of Helsinki-Vantaa Airport, image courtesy of Jaakko via Wikimedia Commons