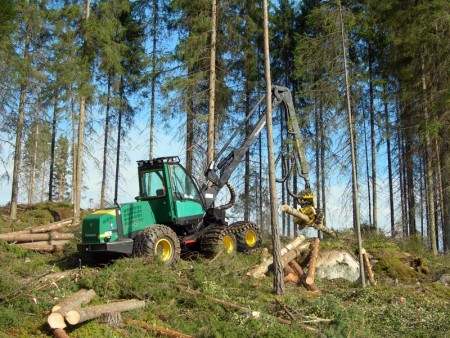 Opinion is still split over logging and the viability of wood as a solution to carbon emissions (via Wikipedia, by Heikki Valve).

The European Bioenergy Association (AEBIOM) has released an op-ed accusing NGO’s of derailing discussions about the EU’s renewable energy future with ‘radical statements’ and ‘non-peer-reviewed studies’.

On 10 January, FERN, an NGO that monitors forests in Europe, released a report denouncing plans by EU leaders to include wood in their 2020-2030 Renewable Energy Directive as a renewable fuel. They criticised the rubric of the plan, which does not include air quality as a factor in determining which sources of energy to support.

The report, titled ‘Covered in Smoke: Why burning wood threatens the health of Europeans’, outlines the negative effects of burning wood in terms of deaths, days lost from illness and the monetary burden of these on the economy.

AEBIOM recently criticised the report, calling it ‘morbid mathematics’, and in a new new op-ed, AEBIOM General Secretary Jean-Marc Jossart denounced the use of non-peer-reviewed papers to hold the debate ‘hostage’ with ‘radical statements’.

Pointing to statistics from the European Commission, Jossart reinforces claims that wood supplied for fuel does not make up a significant portion of trees felled when compared to other industries like timber. This, despite biomass becoming more popular for energy production. He also emphasises wood as part of a carbon cycle: absorbing carbon as the tree grows, releasing is when burnt and storing again as another tree grows in its place. Jossart presentes cultivating wood for burning and for carbon sequestration as tandem objectives.

With the viability of wood as a sustainable fuel depending on the ability to manage forests effectively, AEBIOM acknoledges that malpractice has to be addressed in the industry, reiterating a call for EU sustainability criteria for all bioenergy.

Despite AEBIOM’s discounting of the FERN report due to its lack of peer-review, its findings have been mirrored in previous, peer-reviewed papers, indicating that increased biomass usage is correlated with increased repertory issues in affected populations.

However, questions about timescales to consider and short-term effects of increased carbon emissions have complicated claims like these. A consensus has not been reached by scientists about the effect of burning wood on the environment due to arguments about effects on ice caps and permafrost, as well as the ability for new forests to absorb the same amount of carbon as older trees and the effect of the non-rotation of plants on soil. In late 2017 dozens of scientists signed an open letter in the Guardian, urging the European Commission to review biomass’ position as a renewable biofuel, and questioned gaps in the carbon accounting that pro-biomass figures appeal to.

Opinion is still split over logging and the viability of wood as a solution to carbon emissions (via Wikipedia, by Heikki Valve).